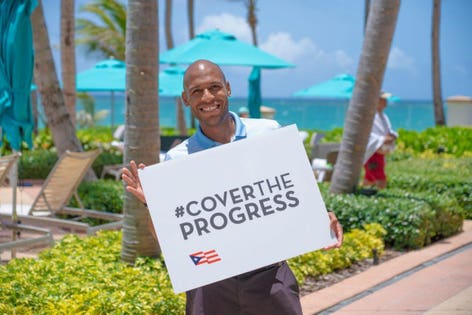 Three months after Hurricane Maria struck Puerto Rico in 2017, the island declared itself open for tourism.

Under the leadership of the Puerto Rico Tourism Company, a governmental organization, they embarked on a campaign to encourage vacationers.

With over $80 billion in damages sustained, tourism was seen by experts as a way to quickly inject money into the economy.  Other sectors like pharmaceuticals or agriculture would take months and years to rebound, and as the island wasn’t receiving the federal assistance it needed, tourism was sure path to recovery.

And recover they did. Recent reports say that 90% of total hotel inventory is up and running, with over 4,000 restaurants and 186 attractions open.

Initial challenges to the encouraging tourism

However, it wasn’t easy to change the minds of many Americans after people’s newsfeeds were flooded with photos of the island’s destruction.

Brad Dean, CEO at Discover Puerto Rico, said, “people want to help and visitors want to come back but no one wants to put undue stress on the ecosystem.”

Pointing out the tourism already accounted for 10% of the islands GDP, Dean felt that they were uniquely positioned to court tourism…in the right way.

The first hurdle was to let people know that yes, Puerto Rico was open. After inviting influencers like Brian Kelly to visit, they focused their efforts on an up-to-date information campaign that would let tourists know what to expect when they arrived. Their site offered daily updates on where electricity was, which regions were ready and key information like where cell phones worked.

They also organized tours specific to rebuilding, encouraging voluntourism to dig out Camuy Cave Park or clean up Crash Boat Beach in Aguadilla. Elsewhere, the All-Star Island used the break from visitors to help rebuild areas like Culebra’s Flamenco Beach that were already in need of a revamp.

It wasn’t just tourists fueling the rebuilding efforts. Businesses like American Airlines and Skift hosted conferences on the island, encouraging their employees to take a few extra days to explore.

And by all accounts, their efforts have been successful. Inbound flight arrivals back to pre-Maria numbers , hitting 4,866 inbound flights this August, according to Discover Puerto Rico.

These efforts continue today, with the island’s governor  Ricardo Rossello recently visiting New York City last week to encourage tourism. The governor stated his interest in making using this momentum to make Puerto Rico even more of a destination; although the sector employs 77,000 people according to Discover Puerto Rico, inbound tourism numbers blanche when compared to other Caribbean islands.

In addition to rebuilding areas, Governor Rossello wants to develop coastal areas and capitalize on the island’s already existing culture around festivals, as well as chinchorreo routes, or unofficial culinary tours. Recently there’s been a spate small business owners setting up shop around the island in the hurricane’s aftermath.

“ The people of Puerto Rico have shown great resiliency and unintentionally earned a PhD in economic recovery ,” said Dean. “They are writing the textbook..on how to use tourism to fuel economic recovery.”

Jeff Bezos’ Blue Origin aims to fly first passengers on its space tourism rocket as early as April
IRS Collections Appears To Be Broken
Where Did Americans Move in 2020?
Tax Angle #1: Shuffle Assets To Sidestep Capital Gain Taxes
Double Taxation of Corporate Income in the United States and the OECD