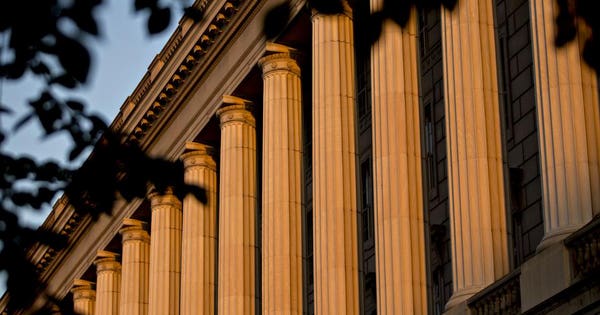 Somehow I missed the big win that the Estate of Andrew J McKelvey had in Tax Court in April 2017.  Fortunately Ashlea Ebeling was on the ball with Monster Founder McKelvey’s Estate Sidesteps Tax On $200 Million PPVF Capital Gain. As far as I can tell I missed it because I was on marijuana. That is to say writing about the tax aspects of marijuana.  And of course the indefatigable  Lew Taishoff who keeps a very close eye on the Tax Court had something on the very day of the decision – A Monster Forward.

Mr. Taishoff’s monster reference is to Mr. McKelvey having been the founder of Monster Worldwide Inc. (MWW) (We connect people and job opportunities). The problem with being a billionaire from founding a company is that it is prudent to diversify from your concentrated position. The obvious way to do that is to sell some of your stock, which will have negligible basis if any.  But there are legitimate ways to kick the can down the road, while still diversifying.   Mr. McKelvey used one of those techniques – a variable prepaid forward contract (VPFC).  IRS blessed the technique in Revenue Ruling 2003-7

This ruling holds that a shareholder has neither sold stock currently under section 1001 of the Code nor caused a constructive sale of stock under section 1259 if the shareholder receives a fixed amount of cash, simultaneously enters into an agreement to deliver on a future date a number of shares of common stock that varies significantly depending on the value of the shares on the delivery date, pledges the maximum number of shares for which delivery could be required under the agreement, retains an unrestricted legal right to substitute cash or other shares for the pledged shares, and is not otherwise economically compelled to deliver the pledged share.

Mr. McKelvey died in 2008, so when his estate settled the contracts, the stock had a stepped up basis.

Tax Court Says It Is OK

The IRS saw it differently.  The IRS position was that the VPFC contracts were capital assets and their extension was, in effect, an exchange of an old contract for a new one, a short-term gain and a long-term gain for a deemed sale of the stock.  Thanks to the decline in the share price, McKelvey was far into the money on the contract yielding a total gain of $200,886,619.  There is an irony if the IRS is right, because the tax maneuver had the effect of turning some long-term gain into short-term gain.  That is the tax planning equivalent of turning gold into lead.

The Tax Court did not see it that way, though.

At the time decedent extended the original VPFCs, he had only delivery obligations and not property rights in the contracts.  ….We hold that the MSI and BofA extensions, executed on July 15 and 24, 2008, did not constitute exchanges of decedent’s “property” in the original VPFCs under section 1001.

And Planners Get Excited

If the McKelvey decision survives appeal with the reasoning preserved, pure obligors under forward contracts and options would appear to be able to extend their contracts without a taxable event, effectively allowing potentially indefinite deferral of tax liability.

John Kaufmann did an extended treatment on taxnotes – Pontifications on McKelvey.  He indicated that the Tax Court argument was problematic.

We agree with the Commissioner that extension of the valuation dates resulted in amended contracts that replaced the original contracts. The new valuation dates determined the share price upon which the number of shares to be delivered at settlement would be calculated, and these dates were seventeen months later than the dates for the original BofA contract and sixteen months later than the dates of the original MSI contract. As the Commissioner argues, “By extending the valuation dates, the parties fundamentally changed the bets that the VPFCs represented, from bets on the value of Monster stock in September 2008 to bets on the value of Monster stock in January and February 2010

The long-term gain issue has a lot to do with the strike price being so far out of the money that non-exercise is improbable.

Using probability analysis to decide in the pending appeal the likelihood that a stock will not reach a floor price, thereby affecting tax consequences, is neither explicitly authorized nor prohibited by any relevant statute. And although Congress authorized the issuance of “necessary or appropriate” regulations to implement the constructive sale statute, see 26 U.S.C. § 1259(f), and the relevant Senate report contemplated that the Treasury Department would do so, see S. Rep. 105-33 at 126 (1997), no such regulations have been issued. Nevertheless, we are persuaded to accept probability analysis in this context.

Kicking the gain recognition can down the road a bit is one thing, but turning that into a lifetime (sadly short in the case of Mr. Mckelvey) game of kick-the-can is another matter.

Because financial institutions are unlikely to set settlement dates much later than execution dates (witness the one- and one-and-a-half-year intervals in the contracts in this case), a taxpayer wishing to obtain his up-front payment without having to settle and incur a large capital gain will want to proceed, as McKelvey did, by executing amended contracts extending his settlement and valuation dates. This device is so alluring that he will be willing to pay substantial sums, in this case $11 million, to obtain the extended dates, and financial institutions, as this case shows, will be willing to extend the dates at an appropriate price.

A taxpayer and his VPFC long party can often be expected to repeat these extensions for the taxpayer’s life, knowing that at his death the shares will have a stepped-up basis in the hands of his estate. The up-front payment will have been received without ever incurring the capital gains tax that would have been due had the payment resulted from a sale of the stock. In this case that payment was $194 million, and thus far, no capital gains taxes have been paid. The Internal Revenue Code should not be readily construed to permit that result.

So it is back to the Tax Court to compute the long-term and short-term gains.

More broadly, the Second Circuit’s decision may affect the analysis of whether the modification of a derivative (e.g., the extension of the term of a total return swap) triggers gain or loss. Many advisors have concluded that such changes could, if economically important enough, require the recognition of gain, or permit the recognition of loss, and McKelvey appears to have lowered the bar for triggering gain (and, subject to the potential application of the wash sale rules, loss). Moreover, in the area of Section 1259 planning, the Court appears to have established an upper boundary on taxpayers’ ability to pass along upside on the stock to their counterparties. Taxpayers contemplating the modification of any derivative, or entering into an equity derivative transaction implicating the constructive sale rules of Section 1259, should proceed with increased caution.

The lengths that a billionaire might go to avoid gain recognition is an indication of what I see as one of the great drivers of wealth inequality-unrealized appreciation .  Most of us have to realize in some taxable form most accretions of wealth in order to spend it to live.  Statistics about what people in different income classes pay as a share of the total income taxes collected do not capture that reality.