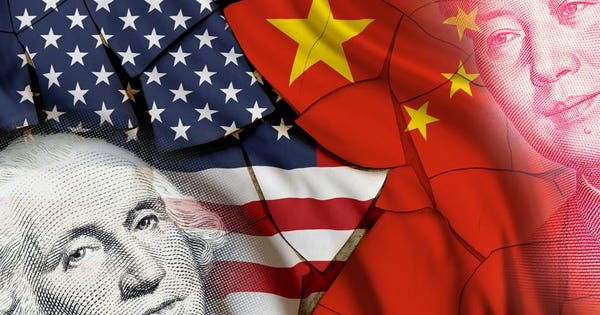 Dating back to the beginning of the last election cycle, the economic terms “tariffs” and “trade deficits” have worked their way into the forefront of our lexicon.  Both are confusing and both have taken on negative connotations that add fuel to partisan tribalism.  Of the two, trade deficits are the least understood and are often used as the rational for the imposition of tariffs.

In 2017 the US maintained a trade deficit with Mexico and China of $63.6B and $375.5B respectively; a deficit that has seen linear growth over the last several decades.  There are endless political assertions expounding how these deficits have been detrimental to the US economy. While I have no interest in supporting or refuting anyone’s political perspective, I would like to discuss the nature of trade deficits and their broader economic implications.

Quite simply, a trade deficit between two countries means that one nation imports more goods and services to its trading partner than it exports.  At face value it sounds fiscally irresponsible to run a trade deficit for an extended period of time (somewhat akin to perpetually borrowing money).  However, despite the negative connotations, running a trade deficit is neither inherently good nor bad, but is, to borrow from a common Facebook status, “complicated” due to the many factors to consider prior to making such a binary judgment.

The trade balance between two nations is typically mutually beneficial.  Conceptually, nations are well served by emphasizing their historical and emerging strengths and unique efficiencies, thus enabling them to maximize productivity gains to facilitate economic growth.  This is how global economies have evolved over time.

However, occasionally a nation may seek to strategically alter its future growth trajectory in anticipation of changing landscapes. For example, Saudi Arabia has started to invest its huge capital reserves in diversified overseas industries in anticipation of long-term declines in its oil revenues. Just as the majority of us do not grow our produce or hunt for our own meat (self-proclaimed hunter/gatherers excluded), specialization and adaptation are a necessity at every level.

Dating back to historical times, the dominant thinking of many nations was to export more than they imported. Adam Smith worked to move the world away from this train of thought by stating that, “nothing can be more absurd than this whole doctrine of the balance of trade.” His reasoning was predicated on the belief that wealth was created solely on the back of specialization of trade and improvement in productivity because it is “always advantageous, though not always equally so, to both,” and that any trade forced by means of subsidies is “disadvantageous to the country in whose favor it is meant to be established.”

So based on this premise, trade and GDP data are not based upon the profitability of a government, but the aggregate performance of businesses within a nation.  Politics aside, let’s focus on how a US/Mexico border-wall could theoretically be paid for by Mexico out of its $63.6B trade surplus with the US.  Does a trade surplus actually mean that the government has the extra $63.6B to finance such a project?

Let’s bring the example home.  Apple generated $29 billion of revenue from the sale of 41.3 million iPhones in Q2.  If it so chooses, Apple could, therefore, theoretically step into Mexico’s shoes and pay for a portion of the wall.  This would raise a litany of questions: what did it cost to produce the iPhones and what part of revenue was reinvested in R&D? From the government’s perspective, was this revenue taxed, and if so, what share of the collected tax revenue remained after existing obligations?  Members of respected organizations such as the Cato Institute and the Peterson Institute for International Economics have denounced these policy theories as political rhetoric that have no basis within any accepted theory of economics.

An analysis of the US trade deficit is further complicated by the status of the US dollar as the world’s reserve currency. Global demand for the US dollar, the currency by which much of the world measures its wealth, is significant.  Consequently, any conversation about a partner nation’s trade balances with the US must acknowledge the desire to save and invest dollars above that of other currencies.

In the 1960’s, economist Robert Triffin proposed that being the global reserve currency would very likely lead to a trade deficit in the US (the Triffin Dilemma/Paradox).  Intuitively, if your currency is the most widely held and is utilized in global transactions, irrespective of your own actions, the perpetual demand for it places an upward bias on the currency – thus necessitating a trade deficit.

Interestingly enough, much of the dollars sent abroad (US trade deficits) flow back into the US in the form of investment, most notably US Treasuries. For example, China holds $1.17 trillion of US Treasuries according to current estimates.

The often dynamic nature of trade deficits also needs to be taken into account.  To take the volatility that energy prices have exerted on the global economy as an example, when energy prices were at elevated levels prior to 2014, the US held a substantial trade deficit with OPEC nations, which at times was in excess of $100 billion dollars.  That reversed to a surplus after energy’s significant collapse starting in 2014 and now stands at much more moderate level after increased US production.

Putting aside political rhetoric, trade deficits are more complicated than right vs. wrong or winner vs. loser.  Investors should exercise caution in their judgments regarding global trade and avoid regurgitating the often-broad simplistic statements that serve to only make better headlines rather than sound and reasoned policy.