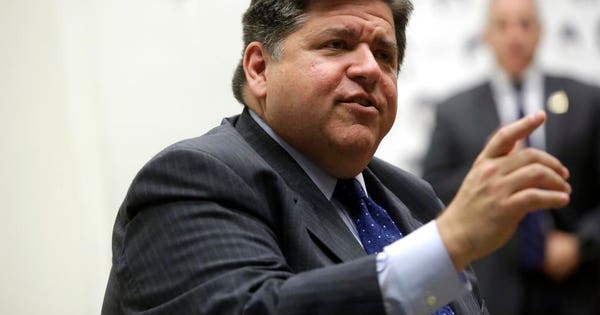 CHICAGO, IL – OCTOBER 01: Illinois gubernatorial candidate J.B. Pritzker speaks during a round table discussion with high school students at a creative workspace for women on October 1, 2018 in Chicago, Illinois. Pritzker was joined by his Illinois gubernatorial Lieutenant Governor candidate Juliana Stratton and former Secretary of State Hillary Clinton as they spoke to students about leadership. (Photo by Joshua Lott/Getty Images)Getty

The evidence continues to mount:  Illinois’s new elected officials and their advisors simply don’t believe that it matters that public pensions are pre-funded.  They view pension funds as something that exists on paper, and pension reporting as a nuisance to be avoided where possible, and ignored otherwise.  Through their actions — and indeed their words — they are showing that they think of public pensions as pyramid schemes, in which new participants pay the retirees’ pensions.  And while that’s true of Social Security, it’s a terrible and terribly harmful approach for state-employee pensions.

What justification do I have for saying this?

First, Prizker plans to revise the funding schedule from a target of 90% funding in 2045 to 90% funding in 2052.  But it’s not just a matter of redoing the math for a standardized formula, like refinancing a mortgage and adding more years to the payoff period.  His office reports a reduction in contributions of $878 million in the 2020 budget, relative to what existing law would require.  But the office has not made available the underlying contributions, and even Ralph Martire, executive director of the Center for Tax and Budget Accountability and member of Gov. Pritzker’s Budget and Innovation Committee, said on the February 20, 2019 edition of Chicago Tonight (about the 18 minute mark) that

he didn’t publish enough material for us to weigh in on those pensions and either support or not support what he did.  One major concern we have is they reamortized, changed the ramp, the payment schedule, and they didn’t point out what the new payment plan looks like, so I don’t see what that new ramp is and we want the state to go to a level dollar so it doesn’t always have this increasing payment obligation.  That’s what strains the fiscal resources.

Sure seems as if “change the target funding schedule” is really a rationalization for yet another pension contribution reduction to plug a budget hole.

Second, an answer Deputy Gov. Dan Hynes gave to a follow-up question, on potential asset transfers into pension funds, at his City Club of Chicago speech last week has been nagging at me (about the 22 minute mark):

Pension benefits must be paid with cash.  How will you pay benefits with non-liquid assets?

We’re not going to pay benefits with assets.  I mean, the assets will go in, they will lift up the funding ratio of the system, but obviously we’re still going to be putting billions of dollars in revenues from the income tax into the system, and those will be used, and employees will be putting millions and billions of dollars of their paycheck into the system which will be used to pay benefits.

This is a very troubling mindset.  This suggests that Hynes, and Gov. Pritzker, view the pension fund as a pile of money which needs to exist for arbitrary matters of accounting, but that, in the end, they believe future benefits are paid by future state revenues.  It’s even more troubling to view employee contributions as paying for these benefits, rather than contributing to the funding of those same employees’ future retirement accruals —

but, sadly, he’s not entirely wrong there.

The largest Illinois public pension plan is the Teachers’ Retirement System.  Teachers hired under the Tier II system, as of 2011 and later, had such severe benefit cuts that the latest annual report (from 2017) shows that in making their 9% of pay contributions (though, to be fair, in many cases, their school districts pay this on their behalf) they are actual paying in more than the actuarial value of the benefits they accrue.  Although, to be sure, the math would work out differently if the discount rate were lowered from its current 7%, in the report’s calculations, the value of Tier II employees’ benefit accruals is 7.11% of pay — that’s 1.89% less than the 9% contribution.  (The story is different for the other major retirement systems which have more generous benefit structures relative to employee contributions.)

What’s more, the Tier II benefits for all systems cap pensionable pay.  That cap rises each year at a rate that’s half the inflation rate.  By the time Prizker’s new 90% funded status target is reached in 2052, that cap will have reduced so much in value that it will be equal to the median teacher pay.

Finally, a new report was published on February 19 by three scholars at the University of Illinois at Urbana-Champaign and at Chicago rejects the very notion of a “pension crisis” based on funded status.  Instead, they argue, a pension system is only “in crisis” when it “ is insolvent and unable to make benefit payments to current retirees.”  Instead, they claim, what matters is not whether the state pays for the accruals it promises its employees or leaves that to future generations, but whether Illinois’ spending on pensions from year to year is level and manageable, in this case, at about 1% of state GDP.

But even this report acknowledges the problem with the teachers’ pensions, though they do so to lament what they call the “‘crisis’ framework” — that is, that legislators were in too much a rush to fix benefits that they didn’t do any reasonable analysis.

There is also a potentially serious and costly flaw in the Tier II plan. If the rate of inflation is high enough, Tier II benefits will be so low that they will violate federal law, which requires that they be at least equivalent to social security benefits. Consequently, Illinois could be required to increase the benefit of approximately 78 percent of the employees not currently enrolled in Social Security (State of Illinois Report of the Pension Modernization Task Force, House Joint Resolution 65, 2009).

The “crisis” framework led lawmakers to create Tier II without much consideration of its potential pitfalls. A belief that something needed to be done in the present led to too little time and consideration of the future implications of what was being implemented. The Tier II plan passed through both state chambers in a single day. Lawmakers never saw detailed projections from pension system actuaries of the plan’s impact. Sara Wetmore, vice president and research director at The Civic Federation, pointed out “They passed this so quickly that there really wasn’t any way for anybody to know if there would be any problems in the future” (Mathewson, 2016). A few short years after its creation, the problems of Tier II are widely acknowledged (Secter and Geiger, 2015).

Longtime readers will recall that one of the first issues I addressed was “Why Public Pension Pre-Funding Matters.”  I cited the risk of legacy costs — the examples of such places as Detroit and Puerto Rico tell us that we can’t take it as a guarantee that a city or state’s tax base will always increase, never decrease.  I explained that once it’s accepted that pensions are funded at some point in the future, it creates conditions for gaming the system, a form of borrowing from future generations in which lawmakers can hide the full extent of their promises from taxpayers, and enable a whole chain of benefit-boosting practices such as pension spiking.

The Teachers’ Retirement System needs reforming; in fact, all the plans need to have the cap unwound or tied to the full inflation rate.  The professors are indeed correct that no such benefit should have ever been implemented without actuarial analysis (and don’t get me started on the never-implemented Tier 3).  And even absent the cap and the other benefit restrictions, teachers, university employees, and a minority of state employees don’t have the uniform safety-net protection that Social Security provides.  If they move out of state before they have 10 years of service, they lose their benefit, receiving only a refund of their contributions (and even then, for teachers, without interest); even if they are vested, midcareer cross-state moves hurt their retirement benefits because their pensionable pay is frozen.

What should happen?  In the first place, all new employees in these retirement systems should be moved onto Social Security, as is already the norm for teachers in 35 other states.  Then, their employer-provided benefits should be provided in the form of fixed contributions, either via a benefit structure that’s the equivalent to private-sector 401(k) plans or via some version of a hybrid plan which provides for pooled investments and benefits but in which participants share and smooth risks rather than the state bearing the risk.

But as long as state funds are being spent paying out current benefits, it is not possible to implement this fix because it requires double-paying, first, for existing benefits, and second, for the restored future accruals of Tier II employees via fixed contributions.

Complaining, as Priztker and Hynes do, that it’s unfair for the state to have to repay this debt, does not fix this problem.  Blaming it all on a single Republican governor, rather than a legacy of both Republicans and Democrats, who over the space of 25 years, declined to fix, and in fact made the “Edgar ramp” worse, does not fix it.

What does fix it?  Accepting the need for an amendment to the state constitution.

What do you think? Share your opinion at JaneTheActuary.com!