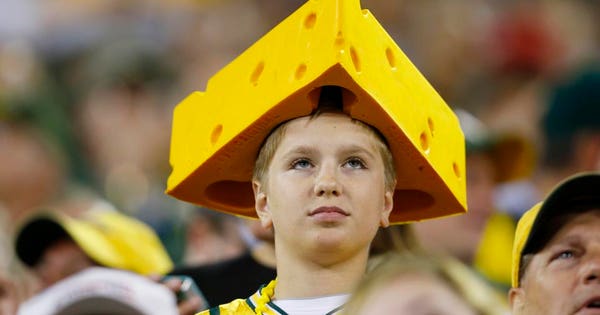 GREEN BAY, WI – SEPTEMBER 13: A ‘Cheesehead’ looks on during the game between the Green Bay Packers and the Chicago Bears at Lambeau Field on September 13, 2012 in Green Bay, Wisconsin. The Packers won 23-10. (Photo by Joe Robbins/Getty Images)Getty

To parapharase Horace Greeley in his Manifest Destiny exhortation, but for those seeking out well-funded public pension plans, it’s time to go north — northwards from Illinois, that is, to the greener pastures of the Wisconsin Retirement System.

Let’s start with some charts:  first, the funded ratio.  (This and the following charts come from data extracted from PublicPlansData.org, which includes the years 2001 through 2017, as well as the Wisconsin 2017 actuarial report.  For Illinois, the three major public plans for with the state bears funding responsibility are combined and, where applicable, weighted averages calculated; for Wisconsin, the WRS already includes the three categories of state employees, teachers, and university employees, as well as most municipal employees except for those of Milwaukee city and county.)

Comparative funded status, based on data from https://publicplansdata.org/public-plans-database/browse-data/own work

Yes, that’s correct.  The Wisconsin funded ratio hovers at or just barely below 100% for this entire period.  What’s more, regular readers will recall that in my analysis of Chicago’s main pension plan, I did the math to demonstrate that even if the city had made the contributions as calculated by its actuaries during this time frame, they would have been insufficient to have kept the plan funded, and even so, would have increased dramatically.  Is Wisconsin keeping its plan funded only by means of unsustainably-increasing contributions?  Let’s compare:

The Public Plans Data site also provides payroll data, which means we can view change over time in the contributions as a percentage of total payroll.  That’s easier seen as a table.

Finally, the Wisconsin actuaries are not hoodwinking us by means of artificially-high valuation interest rates; during this time period, the weighted-average Illinois discount rate dropped from 8.5% to 7.3% (it is now somewhat lower in the plans’ most recent valuations), and the Wisconsin plan’s rate was consistently lower, from 8.0% to 7.2%.  (Remember that lower discount rates result in higher liabilities and relatively lower funded ratios.)

So what is the secret sauce to Wisconsin’s full funding?

A small piece of the puzzle is the much-restrained growth in benefits during this timeframe:

The much larger piece of the explanation, though, is this:  Wisconsin’s public pension system, unique among not just public pensions but among any defined benefit pension in the United States, is designed to share risks between participants and the state, through two key mechanisms.

First, the contribution each year is recalculated as needed to keep the plan properly funded, and that contribution equally split between workers and the state.

Second, unlike Illinois’ retirees, who are guaranteed a 3% benefit increase each year, no matter what, Wisconsin’s cost-of-living adjustments are dependent on favorable investment returns, and, far more crucially, retirees’ benefits are similarly reduced in down years.  The gains and losses are smoothed on a five-year basis to reduce the impact any given year, but, despite fears by many retirement experts that, when it comes down to it, plan administrators would chicken out on benefit reductions, in Wisconsin, these benefit reductions really have been applied just as consistently as the benefit increases.  What’s more, the adjustments take into account not just investment returns but also mortality improvements and other plan experience/assumption impacts.

(For more information, see “Wisconsin’s fully funded pension system is one of a kind” from 2016 at the Milwaukee Journal-Sentinel as well as Mary Pat Campbell’s analysis on her blog last summer; also, note that the Wisconsin actuarial valuation, as do all plans valued in accordance with actuarial standards of practice, already assumes future improvements in life expectancy over time; benefit adjustments reflect the degree to which actual mortality matches this expected improvement over time.)

Of course, the increasing plan contributions during this time frame, from 4.1% to 7.3% of pay, suggest that it’s not all magic.  And as the Journal-Sentinel reports, lawmakers succumbed to the temptation to boost benefits in 1999, and, as Campbell reports, they then resorted to a Pension Obligation Bond and its “beat the stock market” gamble, to fill a budget hole, which, again per the J-S, has worked out in their favor.

Nonetheless, in my article earlier this week on the Aspen Institute’s report on non-employer retirement plans, I wrote that they sought the “holy grail of retirement policy” — risk pooling as a replacement for the risk protection that employer-sponsored retirement plans had formerly provided.  If we want to analyze prospects of risk pooling, collective defined contribution, defined ambition — however we wish to label this sort of plan, there is no better place to start than the Wisconsin Retirement System .