Pedestrians walk past a stock indicator board showing the share price index of the Tokyo Stock Exchange (C, top) in Tokyo on December 25, 2018. –

To avoid doing something you’ll regret, you might have decided to look away from your investments until all those trade war headlines start to subside.

The problem: That may not happen for a while.

“I think this is going to go on for quite some time,” said Nick Giacoumakis, president and founder of New England Investment & Retirement Group in North Andover, Massachusetts.

In the meantime, there are steps you can take, he said. Investors should check their portfolios and make sure they’re comfortable with their allocation.

“If you had a position in a technology fund that was supposed to be 8% of your portfolio and, because of the run-up in technology over the past few years, that position is now a 20% holding, that would be a scenario where you’d want to trim it back,” he said.

Recent volatility could be also be a buying opportunity for long-term investors, he said. Giacoumakis said his firm has recently added money to the real estate and health-care sectors, which he said remain relatively undervalued.

“If you were to invest like you own a grocery shop, you’d be among the shrewdest of investors,” Giacoumakis said. “If something is on sale, you stock up on it.” 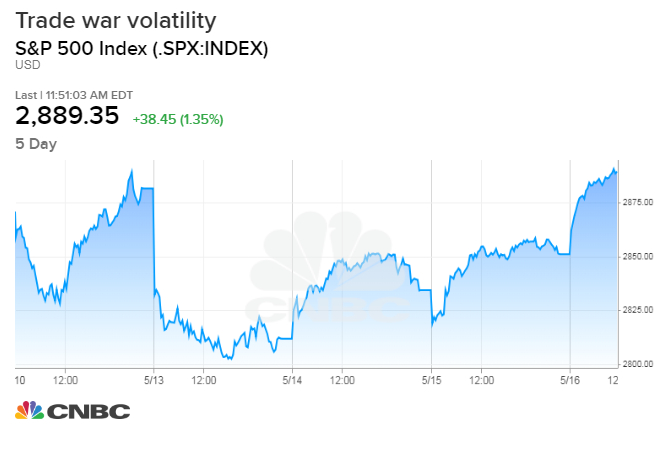 Scott Wren, senior global equity strategist for Wells Fargo Investment Institute, said the bank recently cashed out between 6% and 8% of its portfolio and is optimistic about investing outside of the U.S.

“We think emerging markets have the highest return potential between now and the end of the year,” he said.

Investors should make sure they understand their allocations, he said, so they can take advantage of these dips in the market. “These tend to be fleeting opportunities, and you need to be able to have a plan and then pull the trigger,” he said.

Nicholas Scheibner, a certified financial planner at Baron Financial Group in Fair Lawn, New Jersey, said the trade war between China and the U.S. provides a “prime example” of the benefits of low-cost index funds, which can spread out risk by allowing investors to own hundreds of companies.

“It’s very hard to predict which companies will be hit the worst,” Scheibner said.

More from Personal Finance:
One way to get guaranteed income while delaying Social Security
Those credit scores you see may not be what lenders use
Trump vs. the Fed: What it means for your money