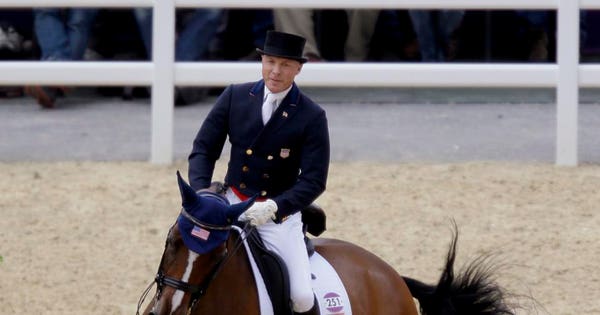 I found the case of Denise Celeste McMillan pretty fascinating.  One thing that makes it possibly unique is the use of the term “mansplaining” in one of the orders.

Jan Ebeling, of the United States, rides Rafalca, past a row of photographers during the equestrian dressage competition at the 2012 Summer Olympics, Thursday, Aug. 2, 2012, in London. Rafalca is co-owned by Ann Romney, the wife of U.S. Republican presidential candidate Mitt Romney. (AP Photo/David Goldman)

According to Judge Holmes in his opinion, Denise Celeste McMillan has now been into the Tax Court six times.  I was able to confirm that when I spoke to her. She took one of the decisions up to the Ninth Circuit and on to the Supremes, who weren’t interested.  I’ve really got to admire her persistence.

She corrected me when I asked her about the most recent decision.  It is just an opinion at this point as she has a motion to reconsider pending.  That motion has been sealed for cause by Judge Holmes.

Lew Taishoff, an attorney who covers the Tax Court with incredible intensity, told me that a motion to reconsider does not have much of a chance in this sort of a situation.  Regardless, if the opinion of Judge Holmes holds, Ms. McMillan assures me that there will be an appeal.

This time on her 2010 return she was going up, as in the past, to challenge the denial of losses from her horse business.  There was also the question of home office deductions and the exclusion of a $70,000 settlement from her homeowners’ association.

Ms. McMillan is involved in dressage, which is my favorite horse activity since I got to cover it so intently in 2012, thanks to Rafalca, who was a factor in the 2012 presidential campaign as Mitt Romney was criticized for claiming losses relative to Rafalca, who was competing in the Olympics. Ms. McMillan told me that she and Judge Holmes had a  little exchange about Rafalca and that he corrected her on the owner of the horse being Anne Romney rather than Mitt.  The trial was in 2014, so this stuff might have been a little fresher in people’s minds. You can read about Rafalca here and here.

Judge Holmes did a holistic analysis of the horse activity and also did the factor by factor analysis that is called goofy by some.  He notes that Ms. McMillan had a horse called Goldrush who was retired from competition but still had breeding potential.  She had not bred him for quite some time but hoped that things would be better if she sent him to Australia.  Unfortunately, he died in 2008.  Judge Holmes did not note that Ms. McMillan had Goldrush’s semen frozen, so there was still an afterlife of breeding potential in 2010.

The holistic analysis was pretty simple:

Ms. McMillan, however, loses because of her testimony. She neither owned a horse nor participated in any dressage competitions in 2010, and this leads us to find it more likely than not that she was not actively and regularly involved in “horse breeding/showing” that year……

(1) Manner in which the taxpayer carries on the activity.

(2) The expertise of the taxpayer or his advisors

(4) Expectation that assets used in activity may appreciate in value

(7)  The amount of occasional profits, if any, which are earned.

(8) The financial status of the taxpayer.

(9) Elements of personal pleasure or recreation

Judge Holmes found factors two and three to be neutral, with all the rest favoring the lack of profit motive.

On the $70,000 settlement from the homeowner’s association, Ms. McMillan argued that it should be excluded under Section 104, because she suffered physical injury from mold in the apartment.  Judge Holmes found a multitude of other issues in the settlement agreement and expressed some skepticism about the physical injuries.

He also disallowed the home office deduction and there were issues about attorney fees, but if you want to dive into those look at the decision.

Judge Holmes indicates that the accuracy penalty would stand up to scrutiny, but it ends up not applying, because the IRS did not prove there was written supervisory approval.

Ms. McMillan is determined to keep fighting.  She wrote me:

The Court sealed my Motion for Reconsideration today so it’s not viewable in the docket.  I’ve attached three documents that pretty much sum up the issues in all three cases and my thoughts on the overall process.  Assuming a decision is filed that just repeats the statements in the Opinion, I will then file a Motion to Vacate the Decision.  I expect the Court to deny my motions and then I’ll appeal.

In an earlier order,  there are some indications of serious tension between Ms. McMillan and Judge Holmes.

Petitioner objects to the revised transcript that this procedure has led to, states that the briefing schedule is “both erroneous and onerous,” and has moved to recuse the judge who heard the case on the ground that he demonstrated a “bias and an inability to impartially and fairly judge the matter at hand.”………

The balance of petitioner’s justification and claims offered in support of her motion — such as that “[i]n recent opinions of this Court, petitioner has been mansplained . . . as an unrealistic, frivolous, objectified female with ‘an affinity’ for dressage who lacks the knowledge of how to run a profitable business enterprise” — are either untrue or unsubstantiated.

Ms. McMillan tells me that her dressage business is a serious business and she is offended by the persistent attacks by the IRS.  I look forward to seeing her arguments in the Ninth Circuit.

Lew Taishoff had Beating A Dead Horse and foresaw that I would be covering this one.

My colleague Peter Reilly, CPA, a fan of hobby loss cases, will find little joy with Denise’s horse breeding/showing business. Denise shipped the late Goldrush, her last horse, to Australia in 2008, where the late Goldrush became the late Goldrush, and never replaced him. Since this case is appealable to 9 Cir, Judge Holmes walks through the Section 183 “goofy” regulations, even though Judge Posner in 7 Cir would have let him take a holistic approach.

Either way, Denise is beating a dead horse.