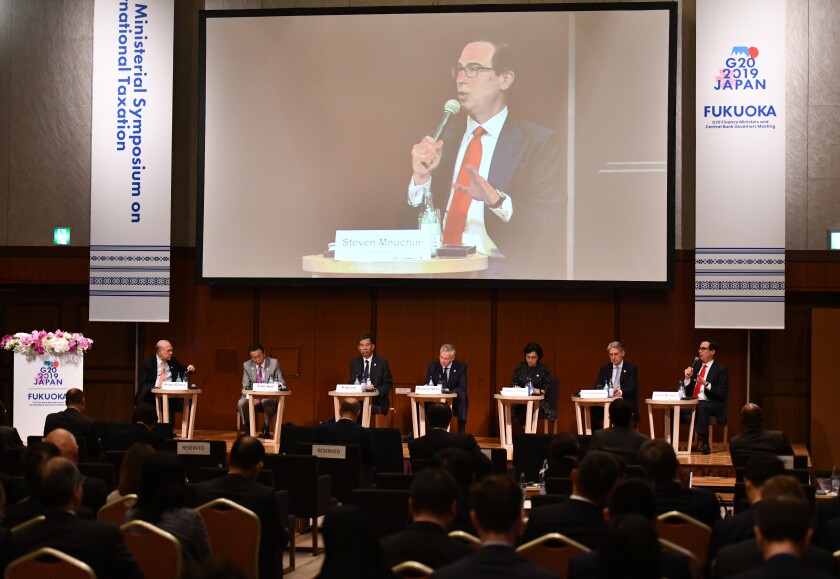 While many countries view taxation of digital service providers as an untapped revenue resource, there are several approaches to implementing such a tax. The Organization for Economic Cooperation and Development has been working at building a consensus framework for a global approach. However, several countries, including the U.K. and France, have gone ahead and enacted their own version of a digital services tax) without waiting for the OECD.

In some respects, it’s similar to the Quill to Wayfair progression in U.S. tax, when individual states started chipping away at the nexus issue in order to protect their revenue from changing technology.

The American Institute and the Chartered Institute of Management Accountants support the OECD’s approach, and through their joint venture, the International Association of Certified Professional Accountants, they made proposals regarding Pillar One of the OECD’s program, the allocation of taxing rights and profit allocation and nexus rules.

“The OECD is not trying to create a mechanism to tax digital companies, but create a new mechanism for taxing the economy which is becoming increasingly digitized,’ said Edward Karl, vice president of taxation for the AICPA.

“The OECD wants to create a completely different approach to taxing businesses. The profit allocation rules in place today are more than 100 years old,” he said. “The basic premise of these rules is based on physical presence, but that does not work in a digital world. We agree with the OECD approach to driving to global consensus, rather than unilateral act of individual countries.”

“We believe there should be globally consistent thresholds, but at a certain point smaller or midsized business would be exempt,” he added. “We’re calling for relatively simpler approaches so it would be easier not only for businesses but for tax administrators that don’t want to deal with smaller amounts. The thresholds should be consistent globally, not different in each country.”

In a letter to the OECD on Oct. 4, 2019, the association noted that income allocation to markets where value is generated — economic nexus — as the underpinning of the OECD project regarding taxation of the digital economy.

”The association believes that economic nexus issues raised and litigated in the U.S. are useful in illustrating issues regarding the reallocation of taxing rights between jurisdictions,” the letter stated. “In particular, the experiences with the U.S. Supreme Court in South Dakota v. Wayfair, and a U.S. suit against a Brazilian individual (‘Castroneves’), provide relevant contextual information in considering new profit allocation rules.”

The letter offered the following points for OECD consideration:

On Oct. 9, 2019, the OECD released the latest installment on its work related to taxation of the digital economy.

Many of the points that the institute put forward are embodied in the October 9 report, according to Monika Loving, practice leader for international tax services at Top 7 Firm BDO USA.

“The release is to put forward what the OECD calls their unified approach,” she said.

The OECD’s tax report will be part of the discussion at the G20 Finance Ministers’ meeting on Oct. 17, 2019, according to Loving: “This is the next installment of work that the OECD has been developing beginning in 2015. The October 9 tax report is a proposal they would like each of the governments to analyze and use as a starting point for discussion and negotiation. There will be a comment period until Nov. 12, 2019. The goal is to reach consensus on an approach by the middle of 2020.”

“Both the U.K. and France have indicated that they will repeal their unilateral measures when consensus is reached,” she added.

He lived in his car for months after unemployment benefits stalled. Then came a cancer diagnosis
She just started her doctorate in physics. Now she’s worried she could be deported
IRS to start collecting overdue tax payments as AICPA urges continued relief
July 16 hearing set in N.Y. Trump tax case after Supreme Court ruling
Dividend payments plunge by $42.5 billion in worst quarter for income investors since financial crisis