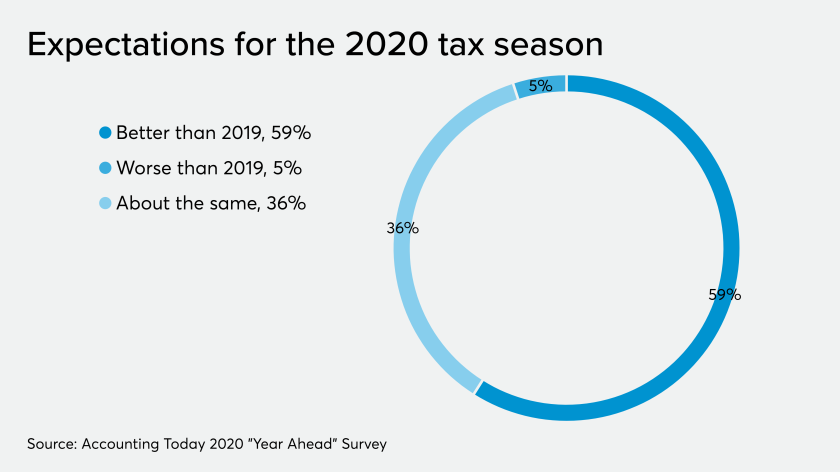 While the smoothest tax season might be one with no surprises, the practitioner who anticipates and is ready for unexpected issues will sleep better at night knowing they are prepared.

One area of potential consequence for preparers is the new partnership K-1s, according to Joe Buble, the tax practice leader at Top 100 Firm Citrin Cooperman: “The IRS has issued draft partnership K-1s which have extensive changes. They require new disclosures of information.”

He also noted that the IRS has proposed regs on Section 163(j) — the limitation on the deduction for business interest. “They were supposed to be final by the end of summer, but it hasn’t happened yet. Practitioners should be on the lookout for those.”

Safeguarding taxpayer data is of critical concern, said Kathy Petronchak, a CPA and director of IRS practices and procedure at Alliantgroup, and a former commissioner of the IRS Small Business/Self-Employed Division. As part of PTIN registration this year, she noted, tax practitioners “have to acknowledge that they have a data security plan in place.”

“The IRS has identified numerous attempts to attack data from the IRS itself, as well as from individual preparers,” Petronchak observed. “There are instances where tax practitioners have been attacked and had something ‘dropped’ on their systems that they are not aware of. Liability insurance is important, and your insurer would want to know what data security plans you have in place … Small firms need to do a risk assessment, or hire someone to do it. A good risk assessment will identify vulnerabilities and inform the practitioner what needs to be done. Preparers are supposed to notify the IRS when they have a data breach.”

The withholding issue was at the top of last year’s pitfalls, and could be there again this year, according to Roger Harris, president of Padgett Business Services: “A lot of people had a surprise balance due or smaller-than-anticipated refund last year. It’s not because their taxes changed, but because their withholding changed. If they didn’t take steps to correct their withholding, the same thing will happen this year. The size of the problem will depend on what kind of job we did with our clients last year in explaining it and getting them to fix the problem.”

“[Qualified Business Income] for the 20 percent deduction for pass-through entities will still be a problem for some taxpayers, especially if they’re over the threshold,” Harris predicted. “Where wages and equipment come into the calculation, there is still time to impact those numbers, but first you have to know what the numbers are.”

Form 1040 Schedule 1 asks the taxpayer to check a box indicating whether or not, “At any time during 2019, did you receive, sell, send, exchange or otherwise acquire any financial interest in any virtual currency?”

“This will hit a lot of individual filers,” said Ryan Losi, executive vice president of accounting firm Piascik. “If the answer is ‘Yes,’ they may need to think about prior years. They may have capital gain or ordinary income depending on how they received it. For example, if they received it from ‘mining’ or in exchange for services, it would be ordinary income.”

For taxpayers who elect to pay the transition tax under Code Section 965 (on untaxed foreign earnings) in installments over an eight-year period, the third installment is due this year, Losi noted.

“If a taxpayer had qualified business activities in 2018 but they had losses, those losses carry forward and reduce future qualified business income,” Losi observed. “It’s important not to forget that, because otherwise you’ll overstate QBI in a subsequent year, which will generate a greater deduction than you are entitled to.”

Another potential risk is where a taxpayer makes a charitable contribution to a state organization and receives a state tax credit in exchange, according to Losi: “Make sure that the taxpayer reduces the value of the charitable contribution down by the value of the state tax credit received, and only claim the net amount for a deduction on the Form 1040.”

On the practice side

Is there a risk in hiring numerous preparers? For a tax preparation service that is hiring 25,000 new seasonal preparers for the filing season ahead, the answer is “No,” said Jackson Hewitt senior vice president of operations Shara Abrams.

“Our new preparers are learning everything we’re teaching them up to the present moment. It’s the returning ones that think they know everything that can sometimes pose a problem,” she said. “But all of our returning preparers go through very thorough updates — the hardest change is with people who think they already know what to do.”

“The most important thing for us is to roll out our tax update training early. Simple things can trip up a preparer. For example, new Form 1040-SR for seniors — the joke is that it’s just a Form 1040 with a bigger font. It does have a bigger font, but it’s more than that,” she said. “It allows income from wages, salary, etc., but it’s nice for seniors with Social Security and retirement income. In the past, that would kick them out of the Form 1040-EZ, because you couldn’t file that form if you had certain types of income. So seniors would have to file more complicated forms, which was cost-prohibitive.”

Abrams cited the increased standard deduction and the Earned Income Tax Credit as issues for which many taxpayers need explanations. When the standard deduction was raised last year, many taxpayers didn’t understand, according to Abrams: “They used to be able to deduct eyeglasses, but not anymore. If we do a two- or three-year comparison, it will give them confidence.”

It’s important for the preparer to talk with taxpayers about life changes and life events, Abrams suggested: “The problem is we rush through and do their taxes and assume they know what we’re doing. Take a few minutes to get to know the client and their life situation so they can make it a complete experience. You want the client to feel that they got their taxes done by a great tax preparer who knows them and is there for them.”

Suzanne Holl, a CPA and senior vice president of loss prevention services at Camico, emphasized the potential for cyberattacks, especially during filing season: “Many cyber claims are related to tax return preparation. A recent trend appears to involve waiting until just before a tax return filing deadline, when firms are likely to be the most vulnerable, to launch an attack that encrypts all of the tax files.”

To avoid becoming a victim, Holl recommends tax professionals regularly update and patch all software with the latest security options to defend against malware, viruses and phishing, “Never click on a link, pop-up or attachment without first hovering your cursor over the link to display the URL,” she said. “If it’s not a URL you recognize, or if it’s abbreviated or tweaked in any way, don’t click it.”

As the 2019 holiday season approaches — the first since states broadly adopted new sales tax laws in the wake of Wayfair — it’s critical that tax professionals educate their online retailer clients about the importance of compliance. “The risks are huge for retailer and consumer alike,” said Robert Peters, a managing director in the tax services practice at business advisor firm Duff & Phelps.

“Retailers will be exposed to tax from and possible interest and penalties in the 42 states that have adopted requirements for remote sellers of goods and services, to register and begin collecting tax. A large number of states — 28 of them — have had these rules in effect since 2018, while the balance have been effective for at least one quarter of 2019. There will likely be little tolerance by the states for any retailer that does not begin collecting sales tax on remote sales into the state. For companies that are struggling to comply, there are still opportunities to limit potential exposure by coming forward on a voluntary basis.”

Last Minute 2020 Tax Planning Taxpayers Can Still Take Advantage Of
My Top Ten Concerns About The 2021 Tax Filing Season
Tax Angle #1: Shuffle Assets To Sidestep Capital Gain Taxes
Just 39% of Americans could pay for a $1,000 emergency expense
Here’s how to get out of that vacation timeshare amid the pandemic