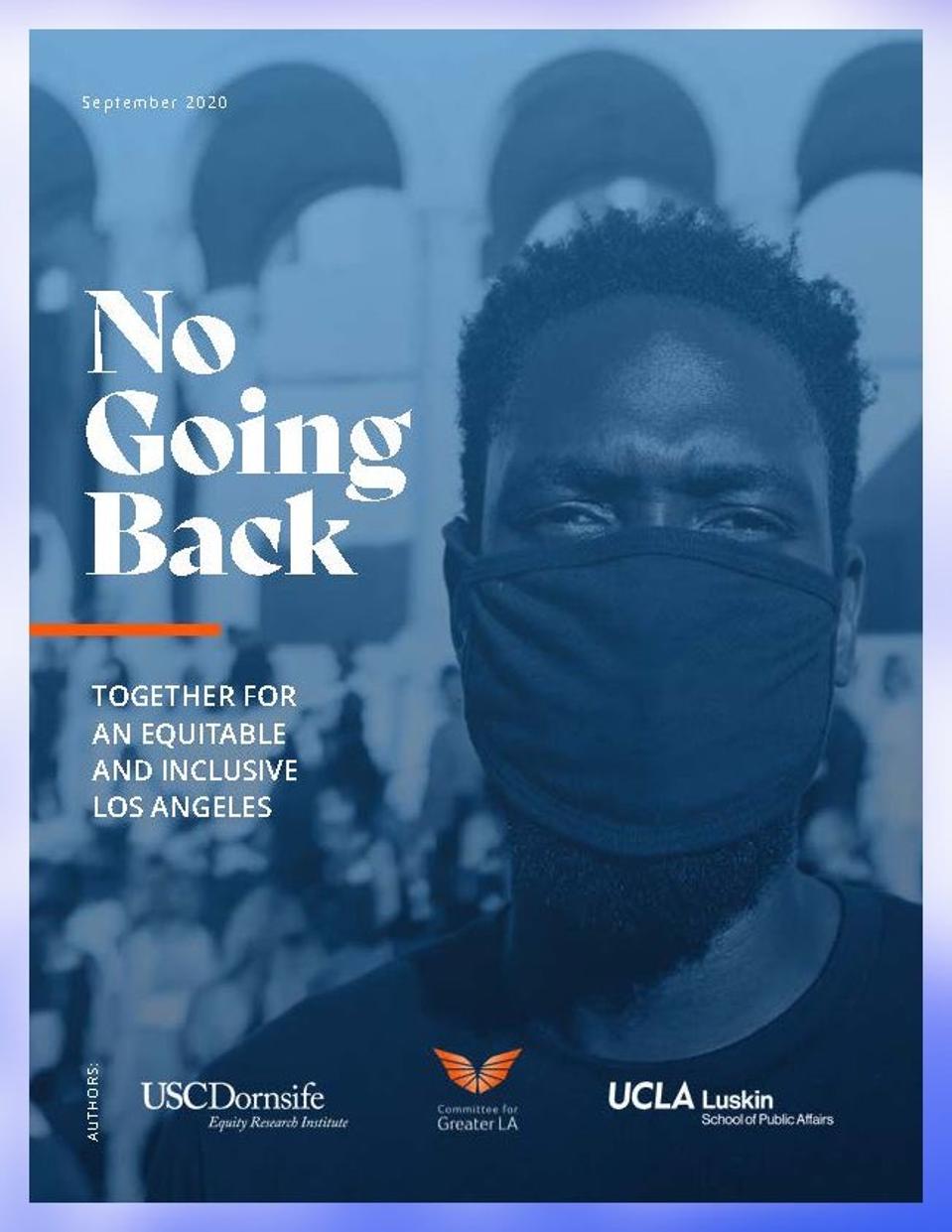 Six months into the Covid pandemic, many people are asking when we can “return to normal.”  But a remarkable new report “No Going Back:  Together for an Equitable and Inclusive Los Angeles” rejects that goal and calls for greater social and economic equity, saying “going back to the Los Angeles of the past is not progress.”

Released by the Committee for a Greater LA, a collaboration of philanthropy, community leaders, and activist scholars rejects that goal for LA (and by implication for the country), the report documents the racial and economic inequities exposed by the pandemic. It concludes that policy responses must do better than simply re-establishing the economically unequal and racially discriminatory status quo that existed pre-virus.  They’re right.

First, it is painfully clear by now that any economic “return to normal” requires getting the virus under control.  To some, this hasn’t always been clear.  In April, President Trump called for separating public health from the economy, saying he didn’t want to “turn the economy off” and his goal was “to have the country opened up and just raring to go by Easter (April 12).”

This false separation between the economy and public health consistently has been rejected by economists of all political persuasions.  Betsey Stevenson, the former Chief Economist at the U.S. Department of Labor, spoke for most economists when she said in April that “Our ability to reopen the economy ultimately depends on our ability to better understand the spread and risk of the virus.”  And a survey of economic experts in late March, shortly after the pandemic took off, found strong consensus that reopening too soon would “lead to greater economic damage” than lockdowns would cause.

But the pandemic continues, and is shining a glaring light on our society’s deep-seated inequalities.  The LA report documents them in relentless detail.

In LA, only 17% of whites are in occupations that are both essential and carry high Covid risk, compared to 29% of Blacks and Latinos.  47% of Latino and Pacific Island children live in overcrowded homes, one of the major sources of Covid infection.  K-12 public schools have shifted to online instruction, but 37% of Black children and 39% of Latinos, compared to 13% of whites, lack computers and high speed internet at home.  Poor and non-white families lack health insurance in much greater numbers while suffering from more adverse health conditions that are linked to Covid infection.  The bleak list goes on and on.

Of course, these inequalities are not unique to LA.  They can be found across America, and existed before the pandemic.  Our inadequate economic response, especially for low-income workers, is exacerbating these problems, so simply “returning to normal” isn’t enough.

LA stands out for its leadership and commitment both in documenting the racial and economic disparities caused by the pandemic, and in calling for a forceful and equitable policy response.  For anyone who’s done policy research, or tried to assemble a committee of funders and activists, the ability to propose this project, organize the committee and researchers, and produce such a high-quality report is nothing short of remarkable.

I suspect that speed and quality rests on the decades of work done by LA progressives that started in the wake of the 1992 disruptions set off by police brutality against Rodney King.  Activists were brought together, from labor unions, academic, communities of color, environmentalists, and philanthropy, with union involvement central to its success, as detailed by labor reporter Steven Greenhouse.

The ongoing work and commitment of these groups has created an infrastructure for informed activism, and the Greater LA report shows the continuing value of that work.  Other cities should have put such a project in motion, and still have the opportunity to do so.  LA’s work provides a model and roadmap for responding to the pandemic that emphasizes its racially and economically unequal costs, and for mobilizing the health crisis to fight for greater equity.

Paul Tudor Jones says he likes bitcoin even more now, rally still in the ‘first inning’
Acorns partners with ZipRecruiter to launch a job portal within the finance app
Will my Social Security be enough? How financial advisors can prepare clients for what’s coming in retirement
Business Meals Tax Deduction Updates And The Impact On Restaurants
Corporate execs are talking differently on earnings calls to please the machines